Welcome To My Blog

Hi and welcome to my blog!

I thought I’d start with the preface to my book, “The Reason For The Rhymes.” 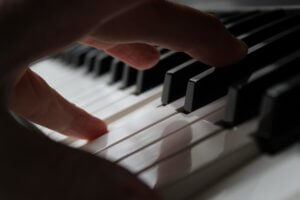 “The leader of this team has been skeptical all day, they’re pretty much afraid of him and they do whatever he says. Oh, and before this job he was a prison warden for almost twenty years.”

That was the last thing my liaison said to me before she introduced me and I walked up on stage in front of a team of senior executives at a Fortune 500 company who had no idea I was about to ask them to write a song.

As I explained to the team who I was and why I was there, I kept an eye on the faces in the crowd. Generally, when I tell a group of business people that I’m going to get them to write a song, I get a mixture of responses from nervous laughter to disbelief to confusion but the team leader—let’s call him “the warden” from now on—could have been playing high stakes poker for his lack of facial cues.

I spoke for about twenty minutes laying out the ground rules but no matter what I said, the warden remained stone-faced. I’ll admit I was getting a bit concerned that there was no way we were going to make a connection.

Then, as I broke up the group into smaller teams of six to write their songs, I noticed that—as predicted—the team the warden was on was deferring to him as they began writing their song’s lyric. I checked in several times nudging them in this direction or that to help them refine their message but still there were no outward signs from the warden of anything but a businesslike desire to get through yet another “exercise.”

In my songwriting workshops, once the teams have written the lyrics to their song’s verse and chorus, I ask them what genre they think their song should be. Country? Blues? Pop? Jazz? When the warden stated that he’d envisioned this song as a heavy metal ballad in the style of the Scorpions, I got my first indication that maybe there was something going on beneath his stoic facade. As I started playing chords and creating a melody for their song, it was like someone flipped a switch and—truly out of the blue— the warden became animated, engaged and totally immersed in what he and his team were doing.

If ninety minutes earlier, someone had told me that this taciturn business executive would be up in front of his assembled colleagues enthusiastically singing his newly written 80s-style heavy metal ballad, it would have been my turn to be skeptical.

The power of songs to challenge, transform, communicate and connect is equal parts inspiring and humbling. It’s why I write songs and why I now teach others to do the same.

But don’t take my word for it. Let’s try a short experiment. Bring yourself back in your mind to the summer after your senior year in high school. You’re driving, the radio is playing and your favorite song comes on.

If you were to hear that song right now, my guess is you’d be back in your car and every one of your senses would be alive with the emotions and memories of that time. For me, it was Bob Seger’s “Night Moves” which I’d performed in a talent show with some friends earlier that year. The acoustic guitar riff that signals the start of that song can still—over thirty years later—put me back in Memphis in that long, sticky summer before I headed out west for college. Still don’t believe me? Go to YouTube, find your song and listen. I’ll wait . . . Now that you’ve done that, I’m almost certain I don’t have to tell you how powerful songs—and songwriting—can be.

Thanks for reading and stay tuned for more blog posts on how learning to write songs develops critical business and innovation skills.

Cliff, please accept my congrats now and likely to follow in the future. In building my small Canadian company we contracted from very large financial corporations. They could’ve used your programs. Over the last decade, in retirement, I have dabbled in oil painting and music. The constant denominator has been the cross over use of colour, composition and emotional practice regardless of application with a brush to a canvas or a pen to paper. Seemingly it’s been right along with your teachings albeit not at your level. The learning curve includes the brain connectivity between a soul and imagination. I am very pleased that the BMI email made your works recognized and available. Looking forward to your next blog. Earl

Thank you for the thoughtful comments.

Hello Cliff! Just subscribed to your blog. We met briefly at your Nashville office a handful of years back to discuss demo singing and you added me to your session singer list. Now my hub, pooch and I have relocated to the Sacramento area. Hoping you’re staying fit and diligent during these times and wishing you continued inspiration and harmony! ~Shana Dellos