Shortly after I moved from New York City to Sonoma, California, I was brought in to help Grateful Dead drummer/percussionist, Mickey Hart, complete songs for his album, Mysterium Tremendum. Mickey and I were introduced via our mutual connection with his producer on the project.

I could tell this particular co-write was going to be a bit different from my typical fare since I was given a very specific set of rules before I even showed up at Mickey’s recording studio in Sebastopol, California. 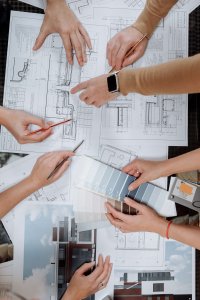 First of all, the musical bed – basically ALL the instruments and percussion – was essentially complete and already recorded. All that remained was to incorporate a lyric and melody that would sit “on top of” the accompaniment. In other words, there would be no gathering around a piano or guitar and singing lyrical and melodic ideas to see what worked.

Then, I was provided with literally reams of poetry written by poet and longtime Grateful Dead lyricist, Robert Hunter. I was told in no uncertain terms that I could not add a single word. Instead, I would be allowed remove words, repeat sections and even move things around to come up with a coherent lyrical story that also had a repeating chorus.

And, finally, once Mickey (who was present for the entire process) approved the completed lyric, I was tasked with writing a melody that fit with the new lyric and sat comfortably on top of the existing musical accompaniment.

I have to say, working in the presence of a musical icon whose career spanned six decades was a total thrill. Not only was he an engaged and enthusiastic collaborator but he was also a genuine pleasure to work with. We spent a thoroughly enjoyable afternoon putting the finishing touches on our song “Cut The Deck.”

The beauty of this co-write was that each person involved was invited to play to their strengths and, consequently, help the others complete a project that was better than any of us could have hoped to do on our own. That is the magic and the intrinsic value of collaboration in any field. Leveraging the individual strengths of your team members will undoubtedly result in the kind of innovations in which everyone can take pride.