A Hundred Dollar Pair of Pants

For as long as I’ve been playing music, I’ve been a fan of the blues. There’s something about the universality of that musical language and the predictable but still infinitely variable music that I just love.

When I was in my twenties, I became a huge fan of a then relative newcomer to the blues scene with the stage name Keb’ Mo’. The combination of his exceptional instrumental work and a voice which resonated deeply with this age-old art form was—and is— irresistible to me. So, you can imagine my delight when, almost twenty-five years later, my music publisher set us up to co-write. 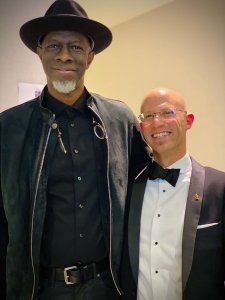 The experience was everything I could have hoped it would be as Kevin Moore (Keb’ Mo’s non-stage name) was a truly gracious and welcoming collaborator. Not only did we end up writing a song together called “Cold Outside” but he released it on his album “Oklahoma” which, in a career-defining moment for me, went on to win a GRAMMY.

When we were chatting after our writing session, Kevin gave me some great insight into his early days as a performer. He told me that after one of his shows when he was just starting out, he was talking to his uncle about the performance Kevin had just given and asked his uncle what he thought. “What you need,” his uncle said, “is a hundred dollar pair of pants.”

Kevin took this seemingly unrelated observation to mean that while the performance was technically solid, the attitude and the confidence were missing. Those hundred dollar pants would both display and impart the confidence that all great performers have. It must have worked as Keb’ Mo’ now has five GRAMMYs, twelve GRAMMY nominations and is a genuine icon in the blues world.

I truly believe that the motivation you will achieve from writing and singing a song will act like your “hundred dollar pair of pants” as you make your way through your work on innovation.